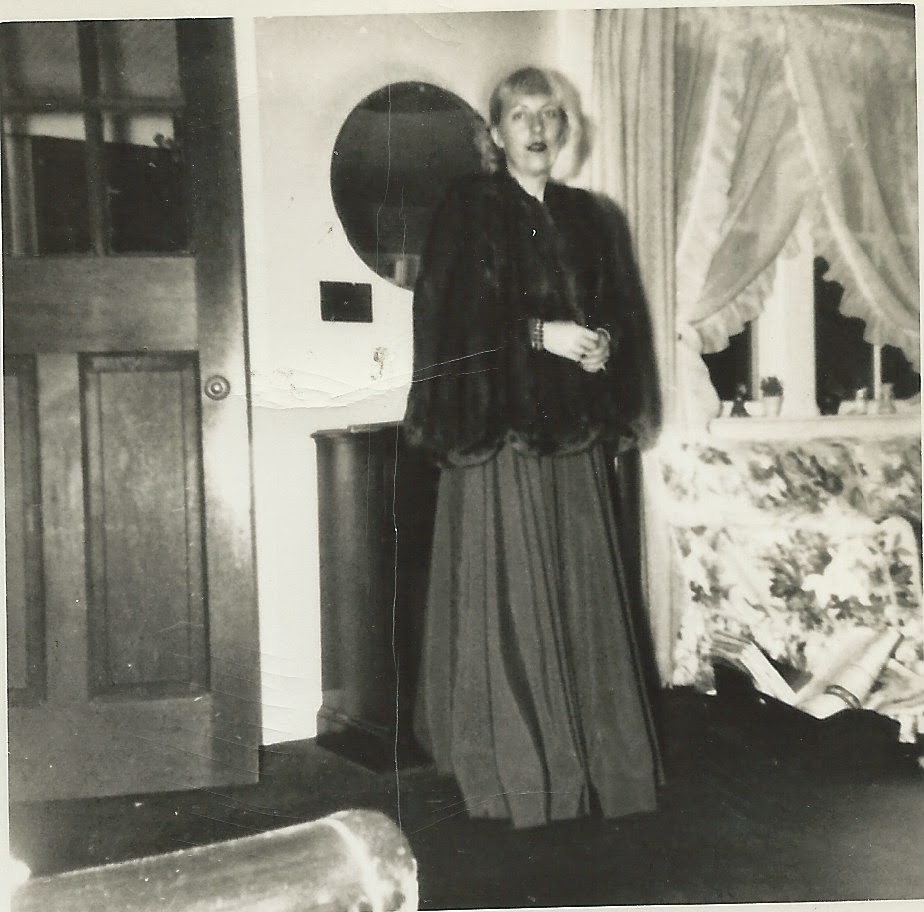 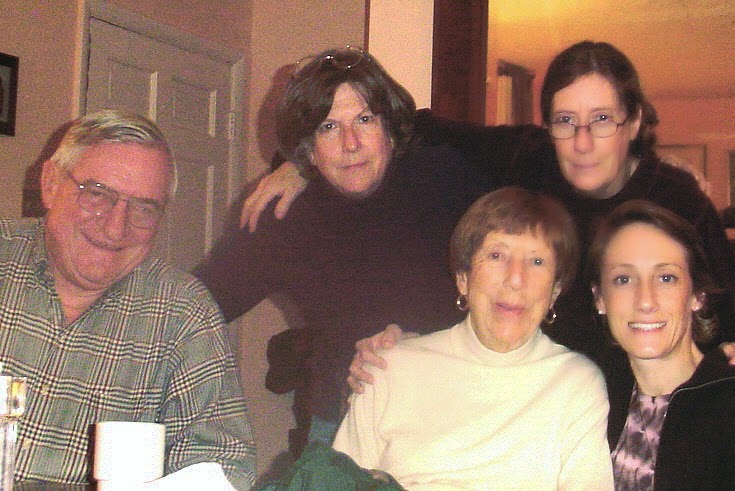 This post started out to be about a house, in Verona New Jersey. As I dug back in time it grew into a history lesson.

New Jersey now is pictured as a crowded suburb of New York City and Essex County is home to the Sopranos and Jersey Housewives. Back in the 1600's it was the frontier Indian country. Even today there are wild and woody places in the state that are hidden gems. We ARE still called the Garden State! 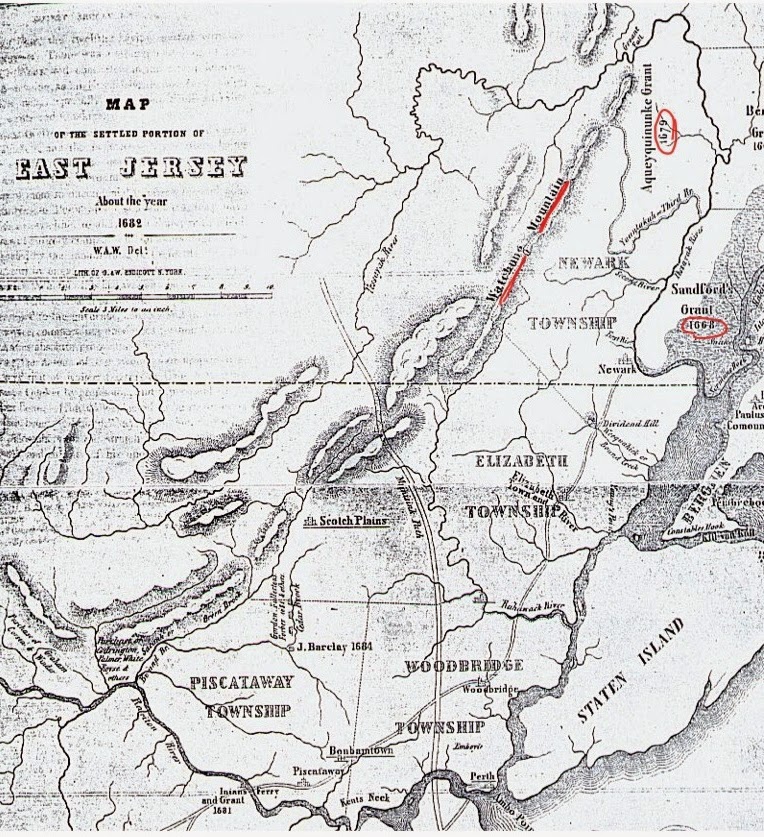 1603
The British took over the area of New Amsterdam from the Dutch in 1664-5. Land grants were awarded to the English Proprietors Lord John Berkeley and Lord George Carteret who sold shares to other investors, regulated settlement and collected rents. The Dutch recaptured the territory briefly in 1673. The English were back in possession a year later. The end result was a confusion of land ownership. 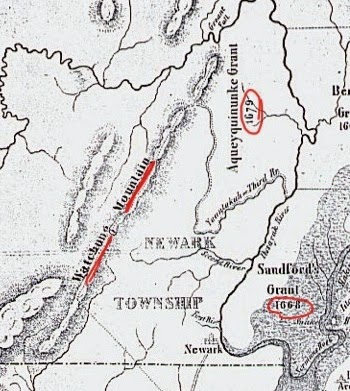 1603
Many of the early settlers were Puritans. The Puritans fleeing European intolerance who settled Connecticut were not so tolerant themselves. Religious refugees from the Connecticut area, led by John Trent, along with members of the French Dutch Reformed Church from New Amsterdam and Staten Island moved to Nova Casnoa's Newark Township. This encompassed the area up to the Watchung Mountains.  Both my French speaking Dutch Reformed Demarest and Quackenbush ancestors were among those moving to the French Patent in the Patterson/Kearny area near present day Newark. Claremont Avenue (the Old Road in 1716) led from Newark to Cranestown (the future Montclair) farmed by numerous members of the Crane family and through the Horseneck (Verona) and on to Morristown. 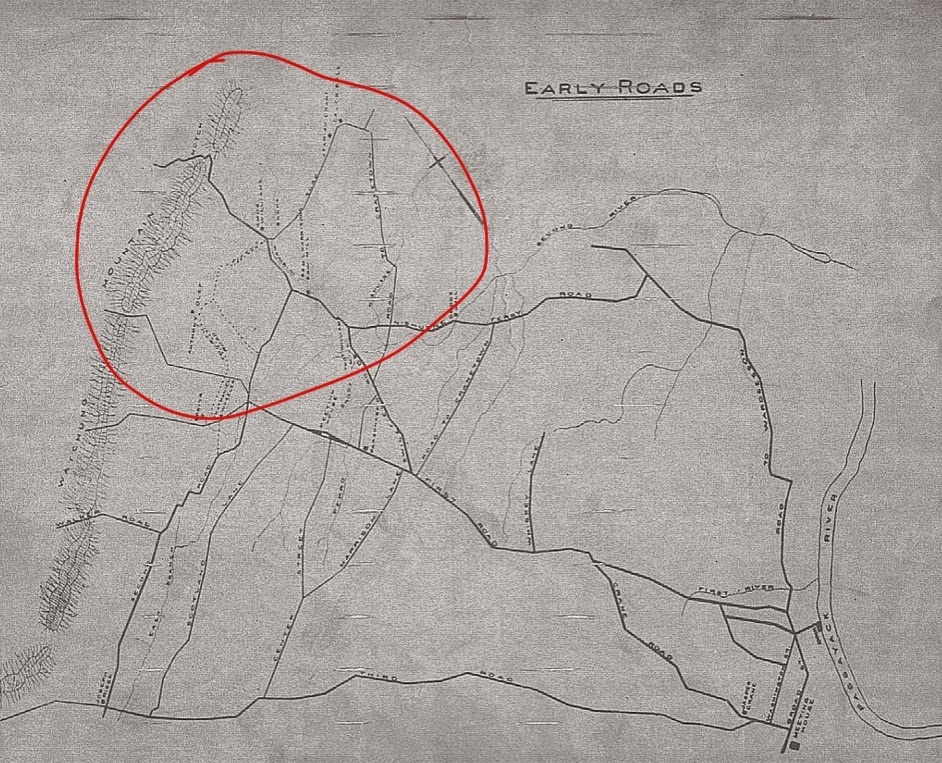 1703
The town of Verona in Essex County has an old history dating back to the 1702. Men from Newark Township bought land from the Indians on the frontier. Thomas Jocabus purchased 14,000 acres known as the Horseneck from the Lenni Lenape tribe (see The Red Road, a Sundance TV series) for about $350 in goods. The land lay between the First and Second Mountains of the Watchung Range. Farms owned by the Jocabus, VanRipen, Personette, Canfield and Bowden families spread across land that became Montclair, Verona, Cedar Grove, and Caldwell. Those names appear on maps into the 1900's.

1730
A Mr. Butters followed a woodland trail and settled by a brook near the Pompton Pike (Bloomfield Avenue) on what became Butterstown Road (still named such on maps in 1833), now called Sunset Avenue.

This hamlet, right on the border with Montclair, included the properties near Prospect and Sunset settled by Nathaniel Baldwin (NJ tax records 1780), Calvin Schaffer and others who in 1776 incorporated Butter's holdings. The Schaffer house (built 1771) located at #77 Sunset (or #79 depending on the maps and census sources) passed thru the family until at least 1870 and still stands beside the brook.

1740's
After mismanagement by the Lord Proprietors all land grants reverted to the King who did not recognize the settlers dealings with the Indian tribes. Crown forces began action on land ownership and demanded payment or re sold farms in the Horseneck region farmers had owned for decades. This led to expulsions and imprisonment. Local militia were called out but were not about to jail many of their neighbors. Samuel Baldwin was one of those locked in the Newark jail in 1747. Neighbors armed with clubs and farm tools set him free and rioters harassed the new owners of farms. The rioting died down as the case dragged on in court. Indian raids from the wilderness in northwest Sussex county threatened the territory and drew the attention of the local troops. The land issues was not resolved until after the Revolution. This little noted Horseneck incident was one of the the first open rebellions against British rule. The idea of resistance spread to other hamlets and towns.

1777/1779
Washington marched up the Pompton Road to use the Watchung Mountains as a stronghold to spy on the English forces.  Twice troops camped in close by Morristown for winter headquarters.There were several important mines in the area to be protected. 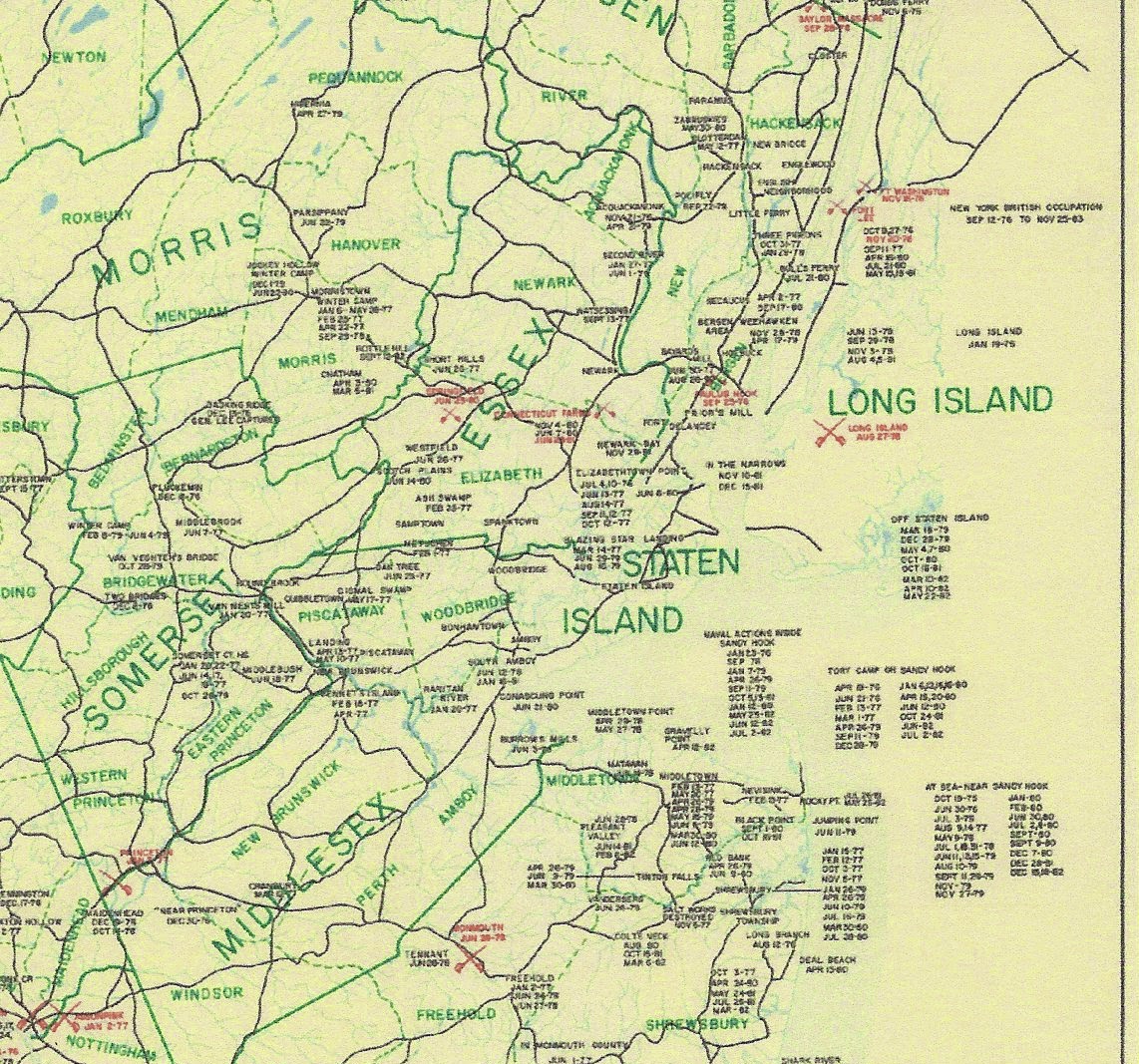 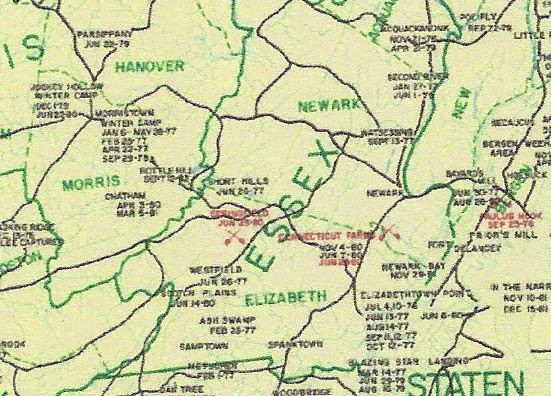 1777
After the Revolution Caldwell Township incorporated the area along the Peakman River called Vernon Valley. There was already a place named Vernon so the Post Office added an "a"to the Vernon section and it became the Verona PO. Verona was still a part of Caldwell as was Cedar Grove. As towns grew up around crossroads, farms and centers of commerce the place names changed. Newark, Bloomfield, Caldwell and Franklin Townships, Buttertown, Cranetown, Speertown and Horseneck all changed names and boundaries over the years.

1800s
The 1806 Newark and Pompton Turnpike funded by Israel Crane of Montclair improved the road to the top of the First Mountain. There was a toll gate near the top of Sunset Avenue. This aided the transportation of goods, especially New Jersey apple cider the favored drink of choice, to the city. In 1814 Doctor Bohn dammed the Peckman River for a grist mill. Farming and timber reminded a mainstay until after the Civil War when progress arrived in the form of a rail line. The Panic of 1878 slowed local growth. It closed down a railroad plan to tunnel through the mountain.  Still land development schemes abounded attracting a wide group of investors including many Civil War veterans. Captain (Company D, 5th New Jersey volunteers) Hiram Cook (1827-1911) was one such speculator. He built his 1884 home on the lake front and developed the recreational park that is now Verona Lake. His first wife died and he married Mary Jane Mills. The Mills name appears on census sheets as a farm family on Sunset Avenue. A daguerreotype of John Mills exists that was rescued from a house sale in 1986. 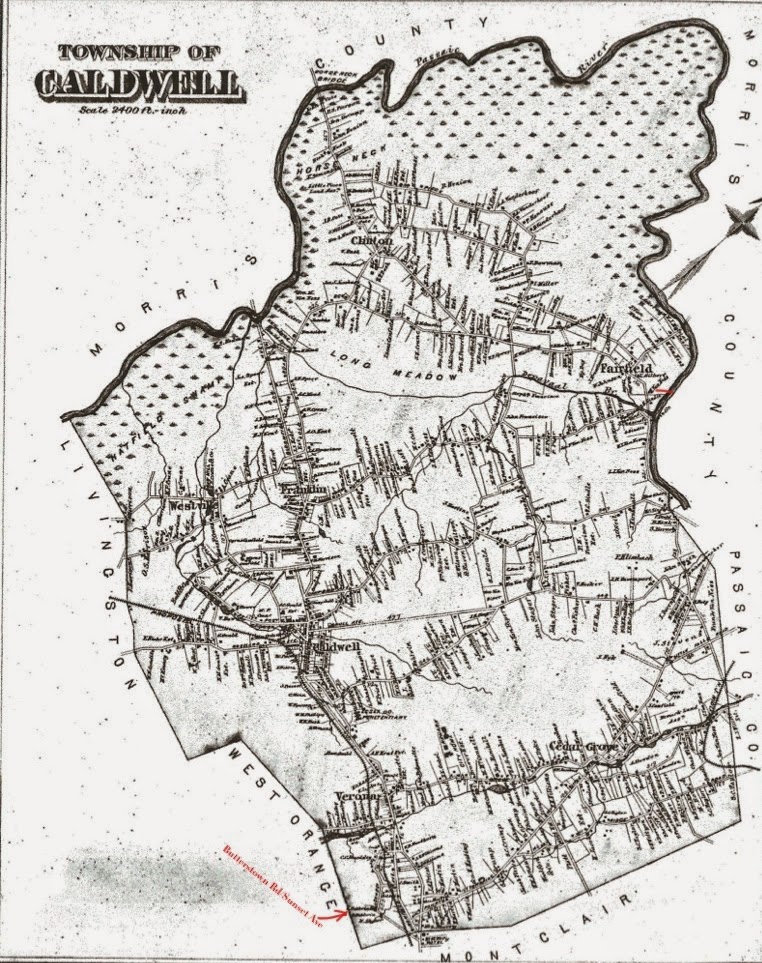 1881
In 1890, the Caldwell Company was formed as a subsidiary of the New York & Greenwood Lake Railway. Two of the owners held also shares in the New York Suburban Land Company, interested in developing the Essex Fells area. The original tunnel plan proved too costly and a new right of way, via Verona and Cedar Grove, paralleled Bloomfield Avenue as a connection to the Overbrook County Insane Asylum (great stories and photos here) and the Newark City Home reform school. With the rails came more land speculators. In 1892 to improve the town image (ie. disassociate with the insane, criminal and rural elements) Verona broke off from Cedar Grove and Caldwell to incorporate as a township. 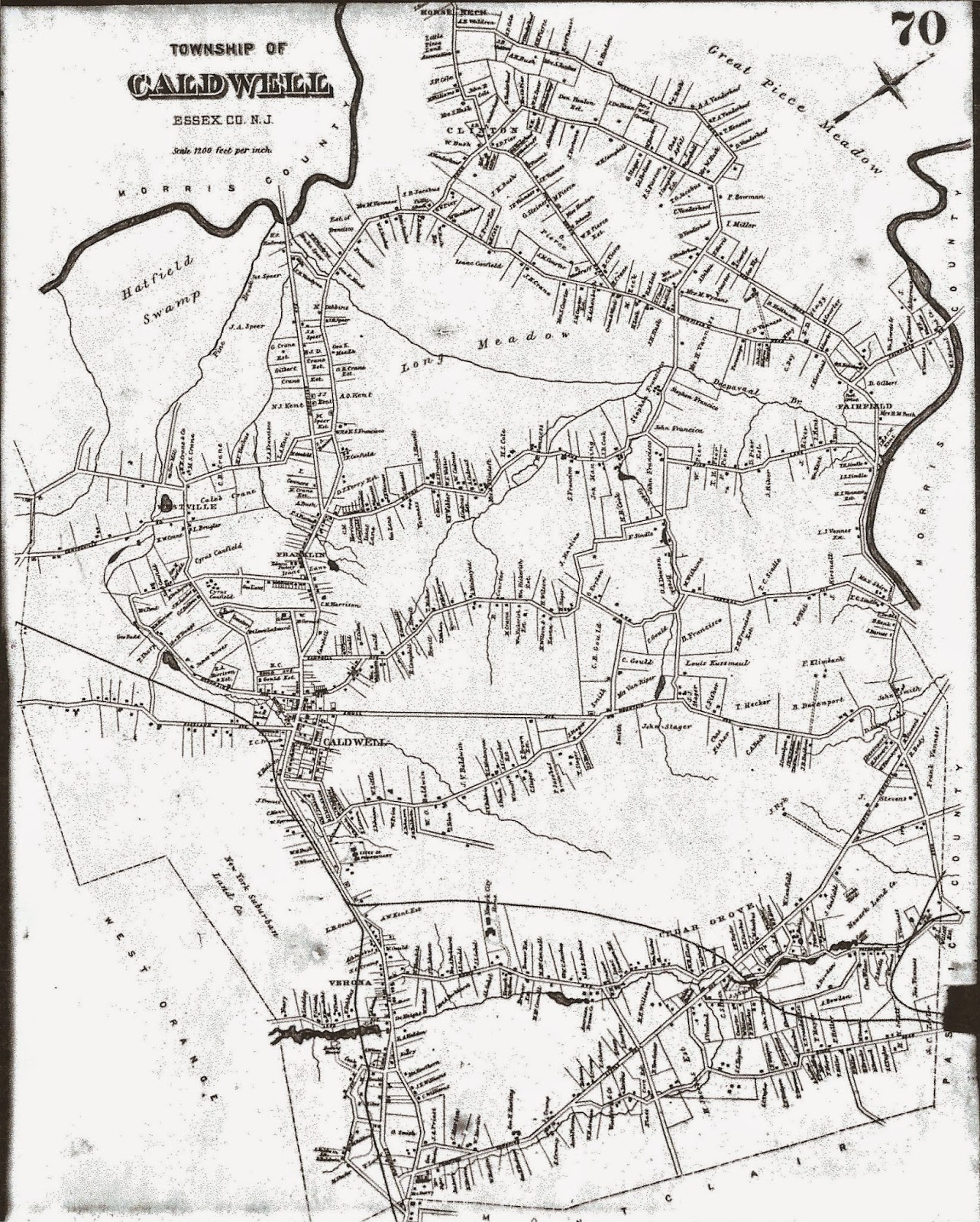 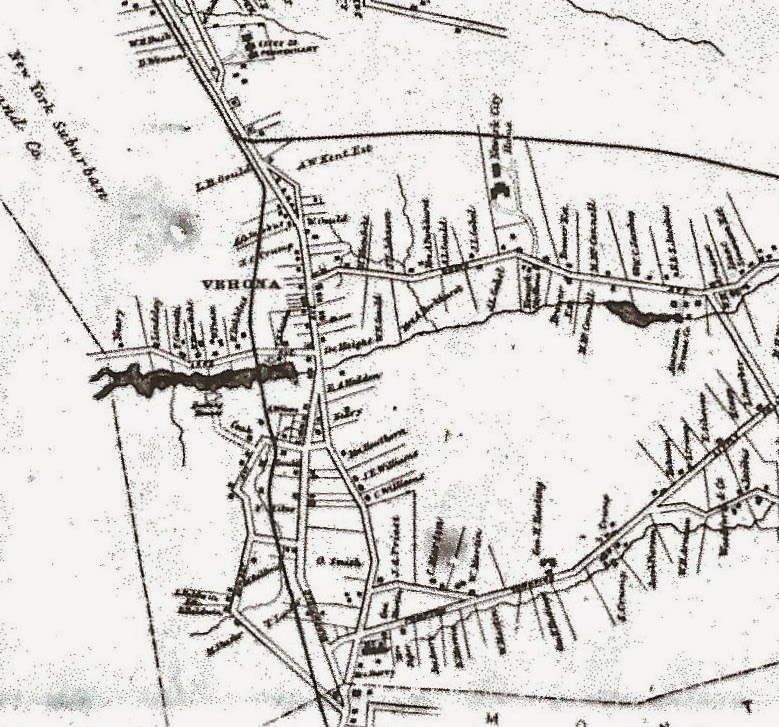